There is a wide variety of wildflowers around Bitterroot Ranch which blossom in glorious profusion in late spring and summer. Many of these plants were used by Native Americans for food or herbal remedies. Some of the roots and leaves were an important source of protein and vitamins. Medical science is discovering today that some of the herbal remedies do have healing properties. Bitterroot – The ranch is named for this flower and in late June, they cover the sagebrush hills, giving them a rose color in places. The root is nutritious and was greatly prized by the Indians who dried and stored them for winter. Europeans found it too bitter for their liking. It must supply needed vitamins, which were otherwise lacking in Indian diets consisting mainly of meat. The Bitterroot Flower on Wikipedia Evening Primrose – Somewhat similar to the bitterroot, this flower grows taller and seems more fragile, but flourishes tenaciously in the most arid looking places. The flowers open especially in the evening and at night. They are pollinated mainly by night flying insects like moths. More Info: Evening Primrose Larkspur – In wet years, this vivid blue flower grows in great profusion in certain patches. It contains poisonous alkaloids, which can kill cattle if consumed in large quantities.

Mountain Bluebell – The blue bell-shaped flowers tend to grow where they have some protection from sage or other bushes. They flower quite early in the spring and tend to hang almost straight down much like a real bell.

Cushion Phlox – These lovely little flowers bloom very early in the spring in great profusion and keep blooming for months. They appear as the snow is melting on the slopes and often bloom in large patches so that one can almost mistake them for a little snowdrift. In places when one is trail riding on a still day they give off a powerful sweet fragrance, which is very noticeable.

Wild Strawberry – In June and July one can see many wild strawberry plants blooming along the trails. At our altitude, they bear only a tiny fruit, but it has a delicious, sweet flavor despite containing many seeds. Lance Leaf Stonecrop – This hardy flower has adapted to extremely difficult conditions in stony, arid areas where there is little top soil and moisture. It grows in tiny clusters in amazing places where it is hard to imagine how a plant could survive.

Lupine – Lupine are very common in the mountain meadows and bloom quite early and into September, often in great profusion. They are very attractive and are nitrogen fixers so that they make an important contribution to nitrogen poor soils. Unfortunately, they also contain poisonous alkaloids, which can kill animals, particularly sheep, if consumed in quantity. Indian Paintbrush – This is the State flower of Wyoming. The vivid red color is striking, particularly as it is so often seen against a backdrop of grey sagebrush and rocks.

I am indebted to two fine books about the flowers in this area. They are “Plants of the Rocky Mountains” from Lone Pine and “Sagebrush Country, a Wildlife Sanctuary” by Ronald Taylor.

There are some magnificent trees growing around our dude ranch in Wyoming’s Rocky Mountains. Many of the first white settlers came in search of their valuable lumber. Railway ties were cut to size with broad axes during the winter and floated down the Wind River at high water in the spring for 75 miles to Riverton from whence they were sent for use elsewhere by train. For almost a hundred years, Dubois could almost be called a lumber town and there were more woodcutters than cowboys.

Unfortunately, the cutting was going on at a far faster rate than the trees could grow in this comparatively dry country and the supply was becoming rapidly depleted. There is now little lumbering in this area and we can enjoy riding through the mixed trees which grow in the forests and along the streams. Quaking Aspen – Aspen are lovely white barked trees whose leaves shimmer with the slightest breeze. In the fall, they turn a magnificent golden yellow and some groves have a tinge of red. The beaver love the inner bark of aspen, which is one of their main foods, and they use the trunks and branches to make their dams. Deer and elk will sometimes scrape off and eat the high protein bark in winter for food. The aspen groves, with their interconnected root systems, have the distinction of being the second largest organism in the world (after coral reefs). The individual trees live only 40 to 150 years, but the root system of the grove can go on for millennia and keep sprouting new trees. Cottonwood – These magnificent trees grow along watercourses. They are fast growing and produce light wood, which Native Americans liked to burn in their teepees because the smoke is clean and the logs do not crackle. Their rough, gnarled, outer bark is a distinguishing feature. The inner bark is sweet when the sap begins to run in the spring and was formerly sought after by many tribes for food. In July, they produce a seed bearing downy fluff, which floats far and wide lighter than snowflakes in the slightest wind. Rocky Mountain Juniper – These small trees usually live for 200 to 300 years, but have been known to live 1,000. They were used extensively by early ranchers and farmers for making fence posts as they last for many decades in the ground. The juniper berries are edible and are sometimes eaten by big horned sheep as well as cervidae and many birds like grouse. After passing through the digestive tract, germination often becomes more viable. The berries are used as herbal medicine in many part of the world and some Native Americans used them as a female contraceptive. More famously, it is often used to give the best gins their flavor.

Limber Pine – This tenacious tree can live for over 1,000 years. It is often found on southern exposures and the crests of hills where the trunks are bent by the prevailing winds, creating strange and gnarled shapes. The large cone has edible nuts, which are eaten by many birds, especially the Clark’s nutcracker, as well as by grizzly bears. Engelman Spruce – The most common spruce in the Rocky Mountains provides good lumber. It can withstand the cold temperatures of the higher mountains. Deer, moose and sheep browse on the branches and birds and squirrels eat the seeds. It is resistant to the beetle infestation, which has killed many of some species of pine and fir.

Sagebrush – Sagebrush grows on much of our ranch and is ubiquitous in the Rocky Mountain West except at high altitudes and in thick forests. This pungent shrub usually grows two to three feet high although some varieties can be over ten feet in height. It is an often-evoked symbol of the Wild West as in Zane Grey’s “Riders of the Purple Sage”. It is too toxic for most ruminants (cattle included) to tolerate in large quantities. The exception is pronghorn antelope, which have been in America far longer than the cervidae, which are comparatively recent arrivals from Asia. Sagebrush, though it has a similar smell, is not related to the seasoning so popular in many Mediterranean dishes. Willows – Willows are small, fast growing trees, which often crowd tightly together along watercourses and in swampy areas. The bark provides good nutrition for animals like deer and moose, especially in winter when little else protrudes above the snow. Native Americans used strips of the bark to make twine and to fashion fish traps. Silverberry – The most noteworthy characteristic of this bush, which grows 10 to 15 feet tall along watercourses, is the sweet smell it exudes which can be almost overpowering in mid summer. The leaves are a silver color as the name suggests and the berries are white. Native Americans ate them occasionally, but only in hard times.

Getting to the Ranch 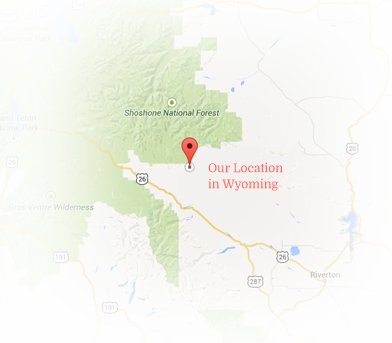 To subscribe recieve stories, news, and specials from the Ranch, please fill enter your email below.